By Colin Gibson in Sermons

This sermon looks at the need for compassion in the world today, and the influence of Karen Armstrong. 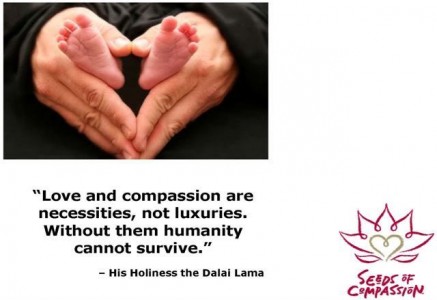 A sermon delivered at Mornington Methodist Church on January 10, 2010.

I suppose most of us are familiar with the Seven Deadly Sins; I don't want to imply that you have committed any of them, I just mean that if you try hard you could probably name several of them. Take a moment to think about that. Pride, greed, envy, wrath, lust, gluttony, sloth. How did you do?

Now what about the four cardinal virtues? Prudence, justice, temperance and fortitude. Or the Seven Holy Virtues matching the Seven Deadly Sins: Humility, charity, kindness, patience, chastity, temperance, diligence. Would you have known their names?

Now just in case you're wondering if you've strayed by mistake into Mr. Bean's examination room instead of a church service, let me challenge you with the thought that as members of faith communities we are more familiar with talk about sin than we are with talk about virtue, especially moral virtue. And it's a moral virtue that I want to speak about today. The virtue of compassion, by which I mean feeling for the sufferings and circumstances of people other than ourselves.

Sounds boring, doesn't it. But just stay with me a little longer.

Now it's plain that our world is very short of compassion. In fact, watching the news or reading the newspaper you could be forgiven for thinking that most human societies, including our own, are being driven by the Seven Deadly Sins rather than by the Seven Holy Virtues.

-- In debt-ridden Dubai, they've just proudly opened the world's tallest office block, 828 metres high, built at a cost of $2.6 billion NZ dollars. You can buy space in it for a mere $10,000 per square foot. Envious rivals are already planning a yet higher structure. That in a world of homelessness.

-- On the Palestinian, Israeli border stands a monstrous concrete wall over which both sides lob rockets and bombs. The Gaza Strip is already a virtual hellhole, in which no human being should have to live. It is set to get worse-like southern Sudan where civil war is on the verge of breaking out again.

-- At Copenhagen, the world's political leaders, determined to protect their own trade and commercial interests, failed to come to any agreement to moderate exploitation of the world's dwindling resources, even in the face of the threat of global catastrophe and the desperate pleas of far less wealthy nations.

-- In Pakistan and Afghanistan, suicide bombers regularly blow innocent civilian bystanders to bits as an expression of their truly terrible hatred and rage against their enemies.

-- It has recently been authenticated that during the civil war in Sri Lanka government soldiers shot dead many of their helpless and unarmed Tamil Tiger prisoners, just as Japanese, Serbian, Russian, African and German soldiers have done to their victims before them.

-- The President of Zimbabwe lives in several unbelievably luxurious palaces while his starving people fossick desperately for food.

-- In America, Europe and Great Britain, greedy bankers have beggared millions and thrown more millions out of home and work.

-- In New Zealand, in a recent issue of the ODT Garth George has described our sad history of child abuse as a heritage of shame.

-- We have an advertising industry dedicated to fuelling our insatiable consumer instincts. The rain forests of the world are shrinking, and with them go the creatures whose habitat they provided. It only took one unregulated season for our fishing industry to wipe out the millennia-old Chatham Islands crayfish migration; in the name of science, Japanese fishermen still hunt whales towards extinction.

No there's not much compassion in the world either for each other or for the natural world in which we live.

A remarkable woman is trying to change all that.

Enter Karen Armstrong. I believe that she is one of our contemporary prophets, and that she will eventually rank with Martin Luther King, Nelson Mandela, Mahatma Ghandi, and Mother Teresa of Calcutta as one of those people whose vision of a better future revolutionised the world.

Karen Armstrong was born into a family of Irish extraction in 1944. In her late teens she entered the Society of the Holy Child Jesus, a teaching order of Catholic nuns. She was sent to Oxford University, where she graduated with a degree in English literature. But ill health (she is life-long sufferer from epilepsy) forced her to leave the order and abandon a later career as an English teacher.

In 1984 she was commissioned to write and present a Channel Four TV series on the life of St Paul. This took her to Jerusalem and her experience there of the city sacred alike to Jews, Christians and Muslims was life changing. She began to study intensely the beliefs and practices of the great religions of the world looking for what they shared rather than what separated them. She became a world-famous scholar, honoured by Jews and Muslims as well as the Christian Church. She is a member of the Jesus Seminar (that group of scholars trying to identify the authentic voice of Jesus in the Gospel records); she has been invited to address the United States Senate and was one of only three scholars chosen to speak at the United Nations' first ever session on religion.

In 1993 she became famous with her book A History of God, a wonderful survey of the idea of God among the religions of the world, from the most ancient past to the present. In 1996 she wrote another book, Jerusalem: One City, three Faiths (1996) expressing her profound respect for the three Abrahamic faiths and her discovery of their shared emphasis on the transcendent importance of compassion.

She says, 'My work has continually brought me back to the notion of compassion. Whichever religious tradition I study, I find at the heart of it is the idea of compassion, of feeling with the other, experiencing with the other. And every single one of the major world religions has developed its own version of the Golden Rule. "Do not do to others what you would not like them to do to you."

So we need to create a new narrative, to get out of the rat-race of hatred, defensiveness, and chauvinism (fanatical pride in one's country and contempt for foreigners); "we need to make the authentic voice of religion a power in the world that is conducive to peace."

In February 2008, she called for a council of Christian, Muslim and Jewish leaders to draw up a Charter for Compassion which would work to foster global understanding in the spirit of the Golden Rule. That Charter was unveiled in Washington, D.C. in November 2009. It already has thousands of signatories, including Prince Hassan of Jordan, the Dalai Lama, and Archbishop Desmond Tutu.

You can read the four-point Charter in your bulletin this morning. [It is also posted on this website.] It is clear, as she says, that compassion indeed lies at the heart of all the great religions of the world. Just look at the material printed on the order of service [see below, at the end of this sermon.] Were you aware that we have such common ground? Or that Jesus' very first act in his ministry of healing was inspired by compassion?

Now the Charter does not assume that all religions are the same, that compassion is the only thing that matters in religion or that religious people have a monopoly on compassion. But it does affirm that since compassion is celebrated in all major religious, spiritual and ethical traditions, following the Golden Rule has to be one of our prime duties, and its expression cannot be limited to those in our own political, religious or ethnic group.

Is the Charter just another nice verbal gesture.? No. It's a tough and challenging statement. For instance, take what it says about our use and abuse of scripture. "We call upon all men and women... to return to the ancient principle that any interpretation of scripture that breeds violence, hatred or disdain is illegitimate."

As you and I know, the Hebrew and Christian Bible (like the scriptures of other faith traditions) has been used to justify many evils: racial intolerance and oppression, the perpetuation of slavery, physical violence against children, the subordination of women, armed conquest and acts of dispossession, religious animosity and warfare, the persecution of gay and lesbian people, the rejection of scientific discoveries, the ruthless exploitation of the resources of our planet and the destruction of its other inhabitants.

Are we really ready to return to the ancient principle that any interpretation of scripture that breeds violence, hatred or disdain is illegitimate; will we challenge theologians and church leaders who persist in using the Bible to put down others?

Karen Armstrong has become a significant modern voice, seeking mutual understanding in times of turbulence, confrontation and violence among religious groups. She has been praised for her personal dedication to the ideal that peace can be found through religious understanding, for her teachings on compassion, and her celebration of the positive sources of spirituality.

Her Charter points to a new way ahead. Common ground in a divided world. What will you do this New Year to make compassion a clear, luminous and dynamic force in our polarized world, in our polarized communities, in our polarized lives? How will you set about demonstrating a rooted and principled determination to transcend selfishness, and break down the walls of those political, dogmatic, ideological and religious boundaries that leave us divided from each other, insensitive to their needs, altogether lacking in Christ-like love and compassion?

Thou, O Lord, art a God full of compassion; and gracious, long-suffering, and plenteous in mercy and truth (Psalm 86).

There came a leper to him, beseeching him and kneeling down to him, and saying to him,
'If you so will, you can make me clean.' And Jesus, moved with compassion, put out his hand and touched him, and said to him:
'I do so will. Be clean' (the Gospel of Mark).

In the name of Allah, who is Compassionate and Merciful (The prayer with which a Muslim commences every that he or she does).
Have compassion for all beings, rich and poor alike; each has their suffering.

Some suffer too much, others too little (the Buddha).

Love and compassion are necessities, not luxuries. Without them
humanity cannot survive (the Dalai Lama).