Trinity Sunday : What's so special about the Trinity? 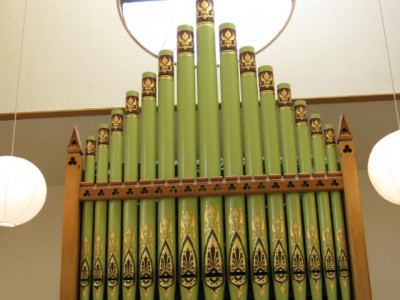 What's so special, what's so important about the Trinity?

It has a long history in Christianity. Church buildings are named after it, like the former Methodist Church here in Dunedin, in Stuart Street, now a theatre. Artists have painted pictures showing the Trinity; and craftsmen have devised various symbols to remind worshippers of this most central doctrine of our faith. In fact, though you may not realise it, you're looking at one of them right now. Look at the cross-beam of the organ case. When this organ was built in London in 1874, a craftsman took his brace and bit and bored a series of three interconnecting circles into the cross beam of the case, symbols of the Trinity; Father, Son and Holy Spirit. There they are again, two on each side, at the top of the side pillars They're fixed permanently in the wood, as a reminder of a fixed and permanent doctrine of the church.

But it wasn't always so. If we could ask some of the earliest Christians what the Trinity was, they would have given us a blank look. In the earliest years of the church there was no such doctrine. You won't find any explicit mention of it in the Bible, and the word Trinity didn't come into use until about two centuries after the time of Jesus.

However, there are passages of scripture that speak of God as three in one. At the end of Matthew's Gospel, for example, you'll find the command to the disciples to baptise in the name of the Father, and of the Son, and of the Holy Spirit.

At the end of every worship service we repeat words used by St. Paul to conclude his 2nd letter to the church at Corinth: May the grace of our Lord Jesus Christ, the love of God, and the fellowship of the Holy Spirit be with you all.

And there are other hints at the Trinity, - as in today's Gospel reading, the story of Nicodemus, where Jesus, the Son, speaks of God as father, and of the mysterious movement of the Spirit.

For two hundred years after the time of Jesus the church didn't have much time for asking questions about what God is really like. They were too busy establishing Christian communities around the known world of the time, on the edges of the Mediterranean Sea, and they had to face persecution by their enemies, particularly the Roman state.

They talked about God in various ways. Some of their ideas were pretty extreme; there was a lot of quarrelling and accusations of heresy. It was not until late in the second century that one of the church fathers, a lawyer named Tertullian took on the impossible task of writing down a formula which would draw the various ways of talking about God together. To do this he turned to Greek theatre, where the actors used to wear masks to depict the various characters. In another old Dunedin building, the Mayfair Theatre, you'll see two masks in the centre above the proscenium arch, - a happy face for comedy and a sad one for tragedy. The name for them was personae. Well, that was the idea Tertullian took over. A persona meant the role that an individual played. And so we have the doctrine of the Holy Trinity, God in three persons, blessed Trinity, as one of the old hymns has it.

Confused? I'm not surprised. If some of you are saying to yourselves, "Why do we need all this? Surely a simple faith is best," well, I wouldn't be surprised.

The trouble with thinking about "God in three persons" is that we do tend to separate them, and think of them as three individuals. And our practice in worship doesn't help much either. At Christmas we concentrate our worship on God the Son, Jesus; at Pentecost the emphasis is on God the Spirit.

Yes, it can be confusing. And the Trinity is seen as a test of orthodoxy, dinned into the minds of faithful Christians, chiselled into the masonry of church buildings, and even into the woodwork of organ cases. If you can repeat the Apostle's Creed, - I believe in God, the Father Almighty, creator of heaven and earth. I believe in Jesus Christ, his only Son our Lord, and, - I believe in the Holy Spirit, - then, at least on the face of it, - you pass the test of a true believer.

But, I'm sure you will want to protest, - surely there's more to it than that. Surely Christian faith is much more than believing a set of doctrines.

It certainly does. The Trinity is really a way of summing up how God is God. It's not just a static, lifeless idea that theologians talk and write about. One way of putting it is this: we can't say everything we want to say about God and God's activity unless we speak of God, imagine God, as Father, Parent, and Creator; as the Son, Jesus, who shows us in his humanity what God is really like; and as Spirit, the energy, the life-force, the power at work in life, making us alive to God's activity, creating community among people.

But while we want to stay with their basic idea, - that you can't say all that you want to say about God without the idea of the Trinity, - we must try to create the possibility for people to know and love God with language that's appropriate for our time and our place.
The bible helps. It has stories like the one about Nicodemus, the Pharisee with the inquiring mind who goes to Jesus by night and is told by Jesus about the mysterious moving of the spirit: "Listen to the wind, Nicodemus. No-one knows where it comes from or where it is going. God's spirit is like that; and you must be born of the spirit."

The bible has stories like the call of Isaiah, where the prophet is gripped by the Holy One in a mysterious encounter in the Temple. "Whom shall I send, and who will go for us?" says a voice. And Isaiah can do nothing but answer, "Here am I, send me."

And of course there are many other stories as well. If only we knew them better and were prepared to learn from them.

Sometimes you hear Christians talking as if Jesus was their special friend, - almost in their pocket. Others speak of the Holy Spirit with and familiarity that to me is almost irreverent. And maybe sometimes the idea of God as Father is a bit too much like a human father.

The point I'm trying to come to in a rather inadequate way is that, just as the church fathers all those centuries ago used their wit and imagination to describe their experience of God, so should we.

If we refuse to move beyond traditional language about God - Father, Lord, King, then we needn't be surprised if modern people don't relate to that and don't want to join in our worship. I don't mean we should ditch it altogether; God as Father has an entrenched place in scripture, and there are many places in the Gospels where we can experience Jesus' deep and intimate relationship with his Father.
The older hymns that we sometimes sing have become classics of Christian worship, and they speak of God in traditional language.

But we need a larger and wider vocabulary to speak of God. Hymn writer Bill Wallace puts it this way:

O threefold God of tender unity,
Life's great unknown that binds and sets us free,
Felt in our loving, greater than our thought,
you are the mystery found, the mystery sought.

Note: not "the mystery sought, the mystery found", which would be the logical sequence. We may find the mystery in part, but we will be always seeking.

We don't need to be limited to scriptural words and concepts to widen our understanding of the Trinity, the three in one God of Christian faith. We don't even have to be limited to words, though they are the main medium we employ. Music speaks to us of God, the visual arts, science in its various categories, the world of nature.
Exploring new ways of speaking about God is nothing new, either. In recent years a whole treasure trove of spirituality has been rediscovered.

Hildegard of Bingen, the amazing German nun of the 12th century wrote this about the divine:

I am the supreme and fiery force who has kindled all sparks of life and none of death. I, the fiery life of the divine substance, blaze in the beauty of the fields, shine in the waters, and burn in the sun, moon and stars . . .

There are no limits to the way we talk about and understand God. The important thing to remember is that Jesus, the Son, shows us what God is really like. He points us to the boundless love and grace of God. And the same Spirit who guided Jesus' life and ministry gives us the power to be people of grace.