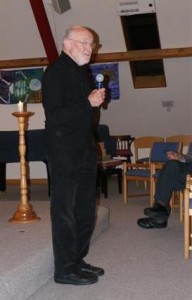 Rev. Canon Paul Oestreicher spoke at the Parish Open Education evening at Mornington Church last Tuesday, April 20th. Dr. Oestreicher who received an honorary doctorate from Otago University last year, first came to New Zealand at the age of seven, the child of refugees from Hitler's Germany in the 1930s.

His topic was "Peace : is it an impossible dream?" As an Anglican priest, he has dedicated his life to working for peace, and spoke to about 100 people on Tuesday evening from his long experience in this field. He was one of the first members of Amnesty International, has been deeply involved in the Campaign for Nuclear Disarmament, and was for many years the secretary for Eastern Europe of the British Council of Churches, making many visits to (then) communist countries in the cause of peace. He is a Canon of Coventry Cathedral and was involved in the Community of the Cross of Nails, an organisation of the Cathedral which sought, and still seeks, to bring about reconciliation between former enemy nations following the Second World War.

Paul Oestreicher gave the example of the campaign to abolish the slave trade of the late 18th and early 19th centuries as a model for the abolition of war as a means of solving conflict. As we commemorate at ANZAC, the Gallipoli landings of 1915, let us resolve to do whatever we can to encourage people, and governments, to refuse to resort to war. There must be a better way! The life of the world depends on it.