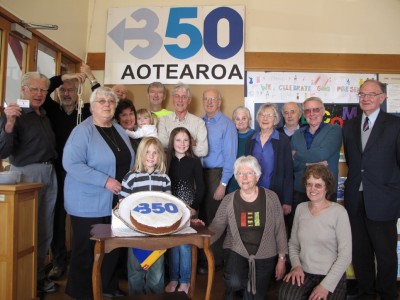 The photograph depicts the congregation and church neighbours gathering to help ring the bell on October 24th, 2009.

The International Day of Climate Action was held on Saturday, 24 October (Labour Weekend).

350 refers to the number of parts of carbon dioxide (CO2) per million in the Earth's atmosphere that climate scientists are now saying is the safe upper limit.

For all of human history until about 200 years ago, our atmosphere contained 275 parts per million of CO2.

Now, mainly as a result of human activity, the planet has 390 parts per million CO2, and this number is rising.

To preserve a planet similar to that on which civilisation developed and to which life on Earth is adapted, we need to reduce CO2 levels to at most 350 parts per million.

One of the many suggested ways of marking the day was to ring a bell 350 times.

Mornington Church was one of several Dunedin churches who rang their church bells on Saturday 24th. Neighbours as well as members of our congregation joined us between 3.00 pm and 4.00 pm and had a turn at ringing the bell!